When there is no need for a robot to take over

Very early in the evolution of surgery, it was realized that surgical trauma triggers reactions and is responsible for the appearance of undesirable effects such as pain, bleeding, infections, ileus, etc.
Since the beginning of the previous century, efforts had begun to reduce surgical trauma without altering the final result. After much experimentation the result was the first Laparoscopic Cholecystectomy in 1987, an achievement which paved the way for the magical world of Minimally Invasive or Laparoscopic Surgery.
The difference between laparoscopic and open surgery is that the former completely eliminates the need for an open incision. The surgeon performs the same surgical operation as he would do using open surgery. Long and very fine tools and cameras are used, which reach the target organ through tubes (trocars) with a diameter of half or one centimetre placed at the start of the operation in the abdominal wall. At the start of the procedure the abdomen is inflated using carbon dioxide (CO2) in order to create more space. When the surgery is complete, this air is removed, the trocars are removed and the small incisions are sutured.
Although I had the good fortune to train in open surgery, my personal choice and preference is for Minimally Invasive Surgery, which I opt for and apply wherever possible. 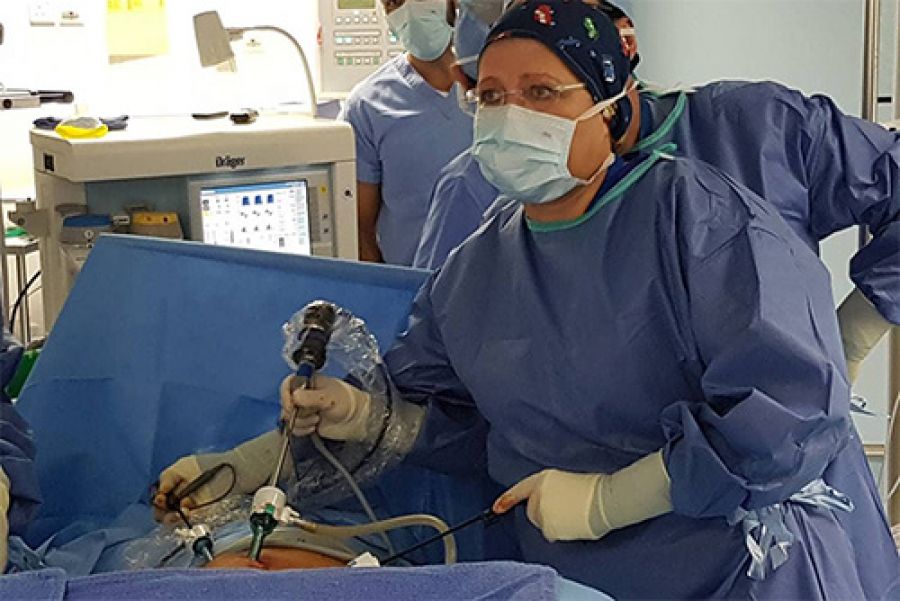 Laparoscopic surgery presents a particular degree of difficulty both in its training and implementation.
✓Its main disadvantage lies in the fact that the surgeon no longer has any direct visual and tactile contact with the surgical field while the fixed position of the laparoscopic tools reduces the range of surgical manipulations.
✓The surgeon views the surgical field and the movement of his tools via a screen, and so normal, direct, three-dimensional vision becomes indirect and two-dimensional.
✓As the tools are long and rigid they have a limited spatial orientation capability and limited degrees of movement. Also their position is fixed and depends on the position of the trocar on the abdominal wall.
✓The ability to deal with an emergency, such as major haemorrhaging, is restricted, forcing the surgeon to perform very mild and careful manipulations in order to avoid such incidents.
✓It cannot be applied to patients with severe respiratory insufficiency, however, as our experience increases this type of restriction is reduced.
✓Quite high purchase and maintenance costs of laparoscopic equipment and tools, which are however offset by the reduction in postoperative complications and patient hospitalization times..
How we met