The future is here

The concept of Minimal Interventional Surgery is nowadays well established in the conscience of every modern surgeon, who understands the need for reducing surgical trauma at all levels. The aim, even when operating laparoscopically through very small incisions and with very fine tools, is to perform very precise, targeted and effective movements so as to limit unnecessary injuries to tissue. The more atraumatic the operation is, the quicker and painless the post-operative recovery, post-operative complications are close to zero, and in general the hardship of going through surgery passes with the least cost. As part of this generalised demand, the space-age technology of robots has gradually entered our everyday life.
Initially it was the US Army that recognized the capabilities and potential applications of robots in warfare. During the Gulf War, the idea of ​​a surgical robot was born and realised in order to deal with injuries in the battlefield directed by the commands issued by a regular surgeon located in a safe area. This was how the robot Aesop (1994) was created first, followed by Zeus (1996), which was the precursor of the current Da Vinci system. In 1997, the first Da Vinci robotic surgical system was imported to Europe and the first Robotic Holocystectomy was carried out by French surgeon Cadiere at the IRCAT training centre in Strasbourg. This first robotic surgery on a human marked the entry into the era of Modern Robotic Surgery. 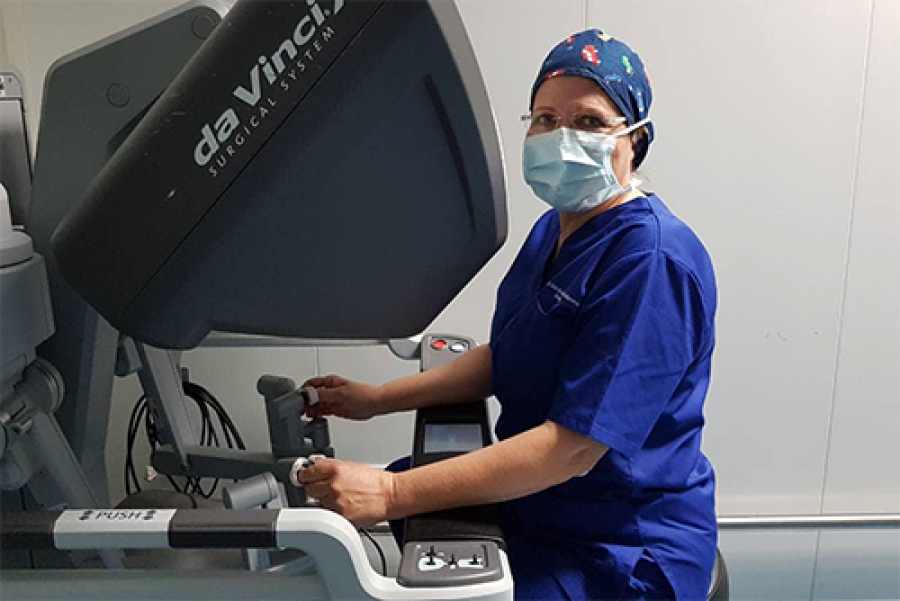 ✓ARTICULATED TOOLS The most important advantage of robotic surgery, compared to Laparoscopic Surgery, of which it is essentially a development, lies in the fact that robotic tools are articulated. Their operating end is equipped with two joints allowing its free movement in all directions, unlike Laparoscopic instruments which are rigid and have a limited degree of movement.
✓THREE-DIMENSIONAL VISION The Robotic Camera, unlike the Laparoscopic one, provides a three-dimensional image. It is fully controlled by the surgeon and stable as it is held by a robotic arm rather than by a human hand. The image is enlarged 10-12 times.
✓SURGICAL PRECISION Easy handling of the robotic tools and the improved image of the surgical field provide the surgeon with the facility to perform difficult and complex surgical operations with extreme precision even in very limited and inaccessible spaces. This results in a reduction of surgical trauma.
✓MINIMUM BLOOD LOSS The loss of blood is very small, minimizing or even removing the need for transfusion, with all the risks involved.
✓RESTED SURGEON Unlike what happens in both Laparoscopic and Open Surgery, throughout the operation the surgeon is sitting in an ergonomic position.
✓PLUS ALL THE BENEFITS OF LAPAROSCOPIC SURGERY
Robotic technology enhances human abilities and facilitates the surgeon in the performance of difficult surgical procedures. The final result is advanced, minimally invasive surgery, and the patient is the recipient of all its benefits
Robotic surgery

✓COST A surgical robotic system has a very high cost both of purchase and maintenance. Robotic surgical instruments have high purchase costs and limited uses. Although there are no cost-effectiveness studies to date regarding the use of robots, it now appears that the gains from shorter hospitalization time and postoperative complications tend to offset the high cost of their use.
✓EXTENSION OF SURGICAL TIMES In the initial stages of its use, as with any new method, there was an extension of the surgical time. Over time however, surgeons along with their support teams are gaining more experience, and this time is decreasing and approaching that of corresponding Laparoscopic surgery.
✓SPECIAL TRAINING The cost of a surgeon's certification in the use of a robotic system is quite high.
How we met